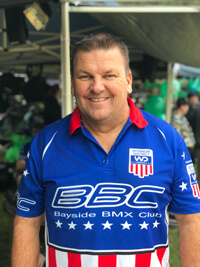 How long have you been with Bayside BMX Club?

6 years with Bayside and 3 years with the original Wynnum District BMX Club in the early 80’s.

What made you join the club?

I came back to BMX after a 30 year break, for the fun, fitness and friendships. Since Wynnum was my club in the 80’s, Bayside was my natural choice and there were a few mates at Bayside who I used to ride with as a kid.

What do you drink?

My drink of choice is Rum & Coke, but on race days it’s lots of water, some Powerade and maybe a can of Coke towards the last couple of races for a bit of an energy boost.

Do you do any other sports?

I also play TRL (Touch Rugby League) on Monday nights, which is a lot of fun and helps with my fitness.

How many BMX riders does it take to change a lightbulb?

Only one, Sean O’Connor, as he’s our club’s lighting expert.

What is the one word you would use to associate with Bayside BMX Club?

“Pride”, as I think our riders are proud to represent Bayside BMX at open days and other major events.

What bike do you race with?

When I started back racing again at the age of 45, I decided to ride one of the original BMX brands SE (since 1977). Initially I only raced cruiser on a Floval Flyer, then about a year later I bought my first PK Ripper and started racing 20” again. I’m now racing 2016 models of both these bikes.

What (if any) is the significance of your race plate number?

Except for 3Q on the 20” and 4Q on the cruiser, which I achieved at the 2017 State Championships, I usually run 88 as my birthday is the 8th of August. The number 8 is considered to be the luckiest number in China and 88 is also Stephanie Gilmore’s number, so it must be lucky, as she’s won 6 surfing world titles.

Do you have a racing superstition/ ritual?

Superstition – never wear anything new on race day without training in it first. I have crashed a few times with new gear and ended up with either ripped pants, jersey, gloves or a scratched helmet. Ritual – only eat bananas in between races.

Have you broken any bone in BMX?

When I was 15, I crashed and had a knee reconstruction which stopped me from riding BMX. Since returning to BMX at age 45, I’ve broken my left collarbone twice, but it healed well both times and hasn’t stopped me from getting back on the bike and racing with the other old guys who refuse to grow up

Back to Team Members